With Google Analytics some users had reported that it would return the full URL… sometimes. The whole length of the URL was reported in Analytics after a forward slash and made tracking the page views difficult in there reports. This has now been addressed in this release.

Last but most important, the plugin would no longer set the default theme selectors once activated. These theme selectors are the most common used and helps with the out of box experience should no further setting up be required. This has now been fixed and improved when updating the plugin.

So thats the bugs out of the way. Now on to the good stuff.

Users had reported that they did not find the help tips useful or found it hard to understand in it’s current form so I have removed the help tips and are now displaying the field descriptions on the side instead. 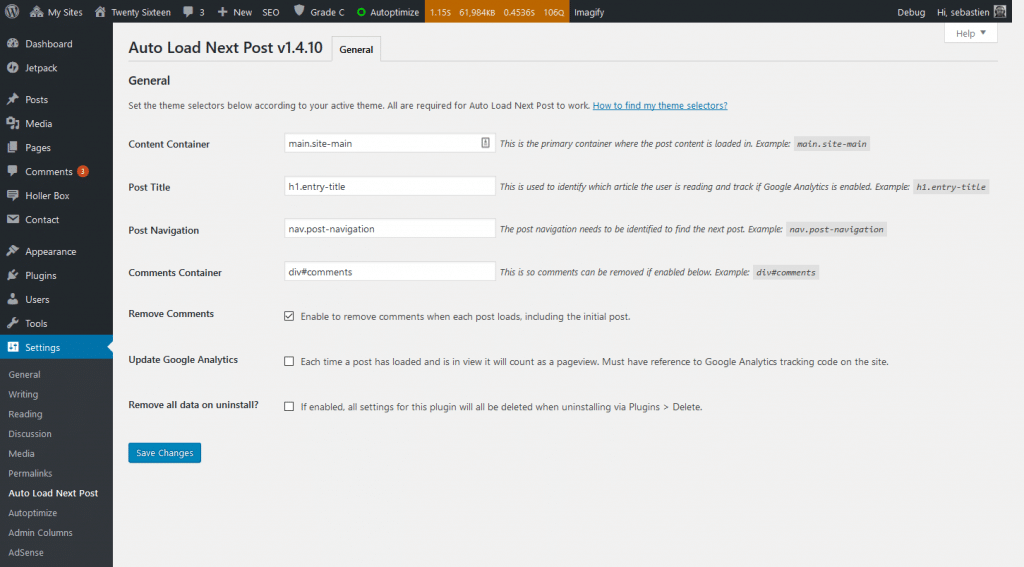 Two changes have been made to the template file for action hooks. The first is a rename of two action hooks to keep all action hooks inconsistent with each other.

What the action hooks were before.

What the action hooks are now.

The second is adding two additional hooks to support other post types in prepartion for Auto Load Next Post Pro.

I have been testing out other themes that did not use HTML5 so I added additional compatible support for HTML semantics to support those themes. If an <article> is not found under the content container then it will look for a <div> with the post ID applied.

I also added a secondary lookup for post navigation should the default lookup fail for some themes and frameworks. Again this is HTML semantics.

If you have not yet seen Storefront latest beta release for v2.3, I actually contributed to that release to make sure the articles are using HTML5 semantics so even without the compatible support I have now added, once Storefront releases v2.3 official it will still work out of the box, only better.

If you are wanting to increase your pageviews then install Auto Load Next Post today. You won’t regret it.

See what Rich Tabor ( Founder of Theme Beans ) had to say in his review.